Smoothie success is happening! Maybe not financially, or famously, but in my home. Yesterday my daughter asked if I’d make her one for breakfast when I made mine. Then, after telling that to my husband he asked me to make him one, too! I haven’t even been able to get him to taste one! Getting that man to eat breakfast can be difficult. When I’m able to he usually wants a bacon egg and cheese bagel sandwich, or a classic egg breakfast with bacon and toast. Drinking fruit and yogurt for any meal seemed less than appealing to him, I think. You can imagine my surprise when those words crossed his lips. So today I kept the smoothies basic; strawberry banana. Everyone loved them (my son tasted his sister’s) and asked that they have them more often. 🙂 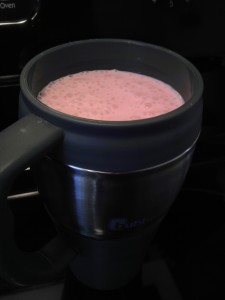 Yes! Sweet, sweet victory!
This one actually follows another victory from the night before. We ate grilled chicken salads for dinner. I do this quite often, and my daughter also loves salad as the meal. My husband, however, has always looked at salad as a side to the main course. Several nights ago he ate his salad first and was surprised to learn that he was quite satisfied and really didn’t even need anything else. He proceeded to tell me that he may be ready to try grilled chicken salad for dinner. That makes me a happy girl! I LOVE hearing my family make healthier choices on their own.
Last night was the night. I sent him a text asking if he was ready and he said yes.
Hours later: Dinner time! I cleaned and cut the boneless chicken breasts. I started filling up four big bowls with different veggies depending in who’s bowl was who’s. Everyone received fresh shredded romaine and cucumber. Some had sliced zucchini and squash, tomato, red bell pepper, green and black olives (I also like to slice carrots but we were out.
When the salads were mostly put together I started heating up the George Foreman. That thing has become a staple in my kitchen since I started changing my diet (and I remembered that we owned one). Now the chicken is cooking, everyone has their bowls and is throwing on their last few items; shredded mozzarella, bacon bits, croutons, and of course getting choice of dressing. Chicken is done in minutes and I’m bringing it to the table. Well, after I measure out my serving so I can accurately log it on Lose It!.
Everyone enjoyed their dinner!! My daughter, who’s working towards becoming a vegetarian, had hers without the chicken, my son took his chicken on the side because he likes to dip it in ranch dressing, my husband and I actually had grilled chicken salad, and he loved it!
So two victories, two meals in a row. Woo woo!

I have to briefly talk about the smoothie I made yesterday. I decided I wanted to try a smoothie with cantaloupe. I started out thinking just cantaloupe and banana would be good. Shoot, I probably wouldn’t even need the sweetener packet! (I went ahead and froze the cantaloupe the night before. It was very juicy and I didn’t want it thinning down the drink any.) I wasn’t too fond of the flavor without the sweetener so I added that. Then it was too sweet and missing something. I added some sliced strawberries. That was exactly what it needed! This turned out to be one of THE best smoothies! Recipe? Sure thing!

There was an error retrieving images from Instagram. An attempt will be remade in a few minutes.